I was headed to downtown Atlanta for a meet with a friend I hadn’t seen in 25 years. We’d met at church when I was in grad school at the University of Oklahoma. I was pretty excited to see my friend again; we’d reconnected through Facebook a couple of years ago.

I work south of the airport so I hopped on 19-41 at 4 pm for a 5:30 meet. The roads were clear. I sailed past the Atlanta Motor Speedway. Tara Boulevard, which is 19-41, was no problem. Lots of lights but no cars. I was heading into the city and traveling against traffic. Before you know it I flew past the airport (haha) and the Porsche North American headquarters. Amazing! I might be downtown by 5. 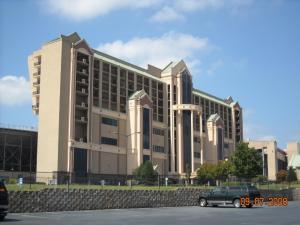 No cars to speak of on the Downtown Connector, where I-75 and I-85 become a 16-lane highway until you get north of Midtown. I was feeling pretty accomplished. I got off at exit 248-C, which turns into Andrew Young Blvd. and feeds you into downtown in an area where there are several convention-sized hotels and lots of restaurants. Hotdog! Not even 5 pm yet and I was there!

I pulled off the highway. Atlanta’s roads are complicated and you always have to be keenly aware of the lane you’re in. As I was cruising into downtown I was baffled by the sudden influx of traffic. I don’t remember Andrew Young ever having this much traffic. Yikes. No one is going to let me over and I’ve got to turn left on Peachtree Street in .5 miles. Finally I inched my way across five lanes. FIVE LANES??? Great Scott! How did I end up back on the Downtown Connector? I was passing exits and had to get back across all those lanes of traffic to get off, again! 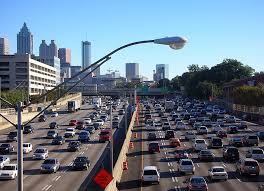 It was 17th Street, Midtown, before I could get off. If you know Atlanta’s connector, you know that some lunatic engineers designed it. You can get off on an exit, but that doesn’t mean you can cross over the highway and get back on like you can in most sane American cities. So I had to follow 17th down past the Millenium Gate museum, and hang a left by IKEA, heading back toward the connector. By then I was winging it. NEVER a good idea in ATL. Some of the modern readers, all you millennials, might be wondering what role my GPS is playing in this. WHAT GPS? I had my Mapquest directions in the seat next to me. I hate GPS and that British lady who gets angry every time she has to recalculate. So I’m on my own. 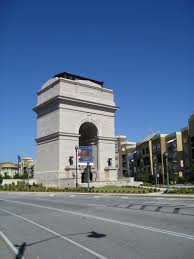 I wing it back to the connector and now I’m in parking lot conditions of 5 o’clock traffic; it’s now 5:15. I might still be on time. I get back down to exit 248-C, but when you get off going south the road takes you away from downtown and toward the MLK Civil Rights center. I turned a U. Still on time! I’m good!

As I pass the lane that goes off downtown, I realize I am yet again in a lane that is pushing me back onto south bound connector. REALLY??? How freakin’ unlucky or insane can I be today? I wanted to cry, scream, and just turn a sharp right and crash my car into the guardrail! I blended back onto the highway. At the next exit, I got off the highway again, near the baseball park where the Braves play and the dome where the Falcons play. Everyone’s favorite place to get lost. I headed north on Piedmont. This will get me somewhere near where I want to be.

I turned this way and that. I was officially late now. It was 5:30. Somehow I twisted my way into a parking garage near the Ritz Carlton. I asked one of the bellmen where the Juke Joint was. He pointed and said, “it’s right across the street from the hotel.” 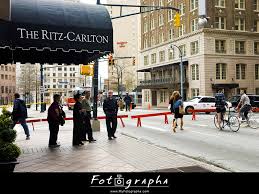 Looking cool as a cucumber in my aviator sunglasses, I waited for the light to change and flowed across the street with the crowd. At 5:40 I entered the turn-stile door that let me off right in front of my friend. As I hugged her neck I said, “sorry I’m late.” “No problem this traffic is crazy,” she replied. Yes, and so is the woman you’re having dinner with, I thought to myself. We were seated and had a lovely time catching up. It was just another evening at Sweet Georgia’s Juke Joint. 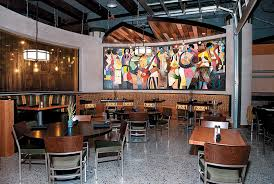 PS obviously these aren’t photographs I took. I got them from Google images. Hope it’s ok. It was just my intention to show some of what Atlanta has to offer.